How to Prevent Returning Grant Funds to a Grantor: Lessons for Government Agencies

Recently, I had the unfortunate experience of listening to professional colleagues describe three distinct cases whereby their organizations successfully secured federal and state grant funding and had to return all or a portion of the grant back to the funders. It pained me to listen to these scenarios, as both a proposal writer and a grants manager, because everything was avoidable. Additionally, my heart went out to them, because I know firsthand how difficult it is to write and win competitive proposals at the federal or state level. I also know how hard it can be to manage government grants if you do not have the right internal controls set up, or adequate staff to support the administration of additional funds. However, I have written this blog article to shed some light on how easy it is to have funds rescinded, and I have offered a few examples of potential solutions.

A county government received a large federal grant to provide social services to low-income families and children. As a part of the county program, staff would implement a back-to-school drive for the families and hand out items needed in the same target community, such as backparks. Shortly after the event, county staff received a site visit from the federal program officer. The site visit review of documents revealed that some individuals receiving back-to-school materials were in fact not from the neighborhood and they were not a part of a low-income household!

As a result, the county government had to give back a portion of the funding used to cover the back-to-school program. How could this have been prevented?

Many grant programs that target a specific population, such as low-income, require some sort of verification to document a household’s income status. Agencies that may require similar documentation include the U.S. Department of Housing and Urban Development, U.S. Department of Health and Human Services, and many others. So how could county staff handle future programs differently?

A nonprofit served as a fiscal sponsor for a local government and received a reimbursable state grant. The funding would be used to renovate the building they leased from the city. Per the grant terms and conditions, the state required that the owner of the building sign legal documentation verifying ownership, and a lease expiration of no less than 20 years. The nonprofit accepted the award and moved forward with execution of the contract. Upon legal review, their attorney discovered that the nonprofit only had thirteen years left on the lease, and would not allow the nonprofit executive director to sign the grant agreement. The nonprofit informed the funder about the lease terms, but the funder withdrew the grant award a month later due to the nonprofit’s inability to meet the contractual obligations of the grant.

A county government had an annual performance contract with a federal agency. The county was awarded supplemental grant funds from the same federal agency to enhance their program by providing staff training. The grant funds had a twelve-month project period. Over a seven-month period, county staff failed to meet several deliverables on their annual contract. For example, staff were responsible for closing ten plus cases a month with low-income program participants. During the past year, staff had only closed six cases due to the retirement of one staff member, and another staff member took an extended medical leave. After a desk audit, the federal agency temporarily suspended the program, offered technical assistance, and suggested a corrective action plan to mitigate program closure. However, the county did not implement any of the suggested actions. As a result, the funder suspended the annual contract due to lack of performance, and they rescinded the second grant until further notice.

In conclusion, department staff at the local level should exercise due diligence to understand, implement, and mitigate all risks associated with a grant so that they are able to keep all awarded funding.

Does one of these three scenarios remind you of something similar that has happened in your department? What steps did your agency take to course-correct? Share with us in a comment below. 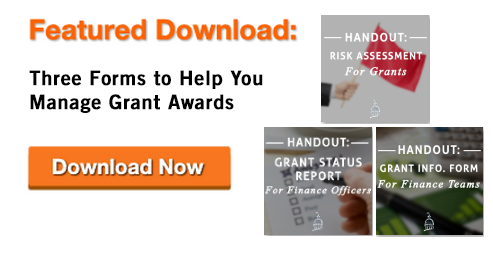 Grant professionals are familiar with the dance that takes place between grantors (those who...

Data storage and management is something that all of us require both personally, and...